Gold surged after the Brexit referendum, posting a 2-year high, and could gain considerable ground in coming months. Meanwhile, gold funds are still struggling to clear the tops of rising channels put into place in February when momentum eased after the first round of the recovery rally. These stubborn resistance levels should give way to healthy trend advances, as early as this week.

There are many ways to play the gold rally but traders often head straight to the worst choice: Vaneck Vectors Gold Miners ETF (GDX). This fund tracks quick moves in the yellow metal but correlation fades badly in quieter market conditions, yielding price action more attuned to broad equity indices than the futures contract. In addition, many fund components hedge their underground resources, limiting profits in good periods and losses in bad periods. 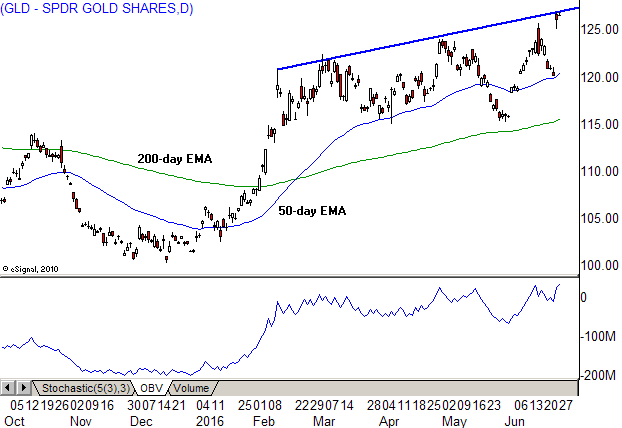 SPDR Gold Shares (GLD) offer the most popular equity proxy in a well-constructed fund that the lowers the impact of contango, which can dampen movement due to divergences between long and short-dated futures contracts. As a result it’s followed the gold market faithfully, lifting to the top of a 4 month channel on Friday and holding that level in the first half of Monday’s session.

It’s hard to tell which comes first, a channel breakout or a selloff that fills last week’s gap. Bulls have the advantage into mid-week but look out below if the fund fails to trade above 128. A channel break sets an upside target between 133 and 135, marking the location of the September 2013 and March 2014 highs. A more difficult target comes into view when the rally clears those levels, favoring an advance that tests the breakdown from the 2011 to 2013 double top at 148. 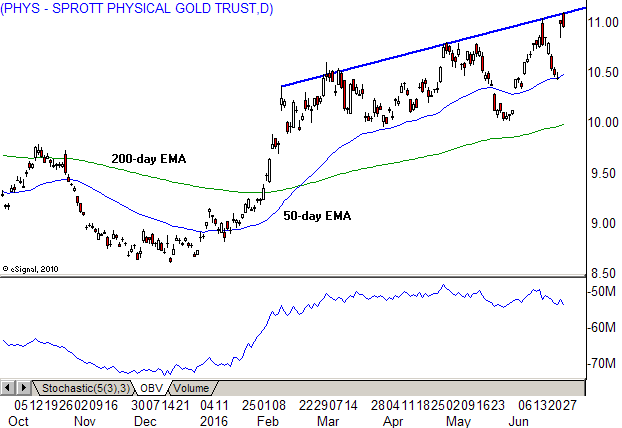 Sprott Physical Gold Trust (PHYS) has emerged as a popular play in recent years, with its lower pricing attracting a larger retail trading crowd than GLD, which is a fund and institutional favorite. This population increases odds for shakeouts by predatory algorithms that target at-home gamers but their efforts should be contained by broad physical and futures pricing trends.

The instrument bottomed out in the 4th quarter of 2015, rallied to 10.36 in February and then eased into a rising channel that’s carved resistance above 11.10. On Balance Volume (OBV) readings look highly bullish like its fund rivals and it should continue to move in lockstep with the sector, tied together by rising fear in world markets. 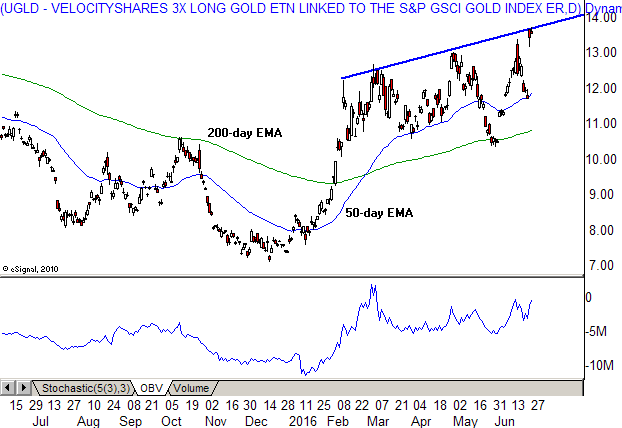 VelcocityShares 3x Long Gold ETN (UGLD) offers aggressive traders the most liquid leveraged fund play, averaging nearly 600K shares per day. This is a sophisticated product that should be avoided by market players with untested risk management skills. When taking exposure, make sure to keep one eye on gold futures because price action will track those turns more reliably than the individual chart pattern.

Price action shows a tight fit with other gold funds but with greater day to day movement, typical of leveraged instruments. Like its rivals, the rally stalled in February, giving way to a series of nominally higher highs that yielded a rising channel. It’s now trading near 13.60, with a rally above 14.30 needed to break resistance and head toward higher targets between 19.50 and 22.50. OBV matches bullish accumulation in other gold funds, consistent with an uptrend that could persist well into 2017.

Gold and related funds rallied strongly into February and dropped into rising channels that have carved a series of nominal new highs. Fund prices dropped toward channel midpoints ahead of Brexit and shot higher after the results, stalling at channel resistance on Friday. They continued to trade near those levels on Monday morning, raising odds for breakouts that should signal more rapid advances in the 3rd quarter.