TTIP is a very bad excuse to vote for Brexit

Barack Obama’s key message to Europe’s leaders last week was “let’s speed up TTIP”. The US-EU trade deal, formally called the Transatlantic Trade and Investment Partnership, has been mired in controversy on both sides of the Atlantic. The “free trade” agenda has become poison in the US primaries, forcing even pro-trade Hillary Clinton to re-examine TTIP.

The next round of talks begin on Monday in New York and Obama is worried – unless serious progress is made in coming months, his trade legacy may be doomed. The problem for the US president is selling TTIP at the same time as trying to warn against the dangers of Brexit. This is a tough ask because TTIP has been a godsend for Brexit campaigners, who argue that the deal is a major reason to cut loose from Brussels.

It’s true that TTIP is a symbol of all that’s wrong with Europe: dreamed up by corporate lobbyists, TTIP is less about trade and more about giving big business sweeping new powers over our society. It is a blueprint for deregulation and privatisation. As such it makes a good case for Brexit.

If being in the EU has brought us TTIP, it has also brought us the means to stop it

Until you remember that the British government has done everything possible to push the most extreme version of TTIP, just as they’ve fought against pretty much every financial regulation, from bankers bonuses to a financial transaction tax. While Germany and France were concerned about TTIP’s corporate court system – which allows foreign business to sue governments for “unfair” laws like putting cigarettes in plain packets – the UK secretly wrote to the European commission president demanding he retain it.

At the heart of TTIP is a radical agenda of deregulation. The ambition is that everything from food standards to financial policies are “standardised” in the US and EU, with big business gaining new powers over the process. This could have been inspired by David Cameron’s own programme of stripping away laws that annoy big business, no matter how important they are for people and the environment.

Cameron’s policy means scrapping two laws for every one brought in and giving every regulatory body the duty to have regard to the desirability of “promoting economic growth”. That could include the equality and human rights commission and the health and safety executive. The TUC described Britain as “exporting their anti-worker position into Europe and it is spreading like a bad outbreak of gastric flu”.

Brexit wouldn’t necessarily stop TTIP anyway – that’s all down to the transition process. At the very least, Britain would need to adopt many of TTIP’s provisions in order to remain in the single market.

But it gets worse: every scenario for Brexit is premised on extreme free trade agreements coupled with looser regulation to make us more competitive. “Outcompeting” the EU through lower standards is the strategy. High-profile supporters of the Brexit campaign have repeatedly said that they believe the UK would be able to realise a more “ambitious” and faster free trade deal if we stood alone. There’s every reason to think that Brexit will turn the UK into a paradise for free market capitalism: a TTIP on steroids. 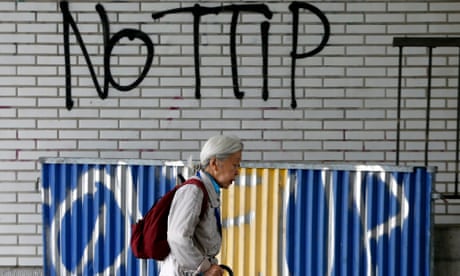 What is TTIP and why should we be angry about it?

Is there any hope? Yes – the movement to defeat TTIP received the support of well over 3 million Europeans in a little over a year. In Berlin, 250,000 people took to the streets last October. The deal was meant to be signed by now – but together, Europe’s people have seriously stalled things. Would it really be possible to stop such a move if we couldn’t link up with campaigners across Europe? If being in the EU has brought us TTIP, it has also brought us the means to stop it.

Europe also allows the potential to take on the corporate power which TTIP symbolises: the biggest threat to our sovereignty. Even in the best of circumstances, there is only so much a small nation state can do against the size and power of global big business. But through being in Europe we could stop tax avoidance, introduce a financial transactions tax, hold corporations legally responsible for their human rights abuses, enforce world-leading climate targets, develop new forms of public ownership of key resources. At least, we could if Britain stopped standing in the way.

Obama’s rationale for avoiding Brexit is quite different. The US establishment has always been interested in Britain’s role as a fifth column in Europe, undermining a social Europe on behalf of global (read US) corporations. Reclaiming our sovereignty means not playing this role, and instead working with those in Europe who want to build a different world. Another Europe is possible.